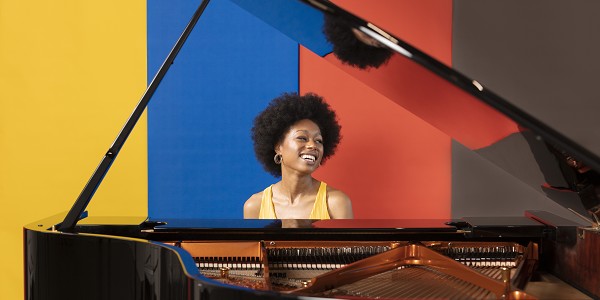 Isata Kanneh-Mason is the recipient of the 2021 Leonard Bernstein Award, a 2020 Opus Klassik award for best young artist and, as a member of the Kanneh-Mason family, the 2021 best classical artist at the Global Awards.

Her debut album on Decca Classics, “Romance – the Piano Music of Clara Schumann”, drew popular and critical acclaim, entering the UK classical charts at No. 1 when it was released in July 2019 and leading Gramophone magazine to extol the recording as “one of the most charming and engaging debuts” and Classic FM to praise Isata as “a player of considerable talent”. This was followed in July 2021 by “Summertime”, a journey through the varied piano repertoire of 20th-century America featuring Samuel Barber’s Piano Sonata and a world premiere recording of Samuel Coleridge-Taylor’s Impromptu in B minor.

During the 21/22 season, Isata will be one of the European Concert Hall Organisation’s Rising Stars, and will perform recital programmes at some of the continent’s most illustrious concert venues.  As part of her ECHO Rising Stars season, she will also engage in educational and outreach activities and collaborate with Jamaican-British composer Eleanor Alberga on a newly commissioned piece. Isata also continues to perform with her siblings, including regular duo recitals with her brother, the cellist, Sheku Kanneh-Mason.  Recent highlights include appearances at the Théâtre des Champs Elysées, Paris, Teatro della Pergola, Florence, L’Auditori, Barcelona, the Auditorio Nacional, Madrid, and Carnegie Hall, New York.  Isata Kanneh-Mason is a member of KONZERTHAUS DORTMUND’s series “Junge Wilde” since the season 2021/22 as well.